Medieval Flats - Zinnfiguren – made by Hans Müller of Erfurt

Among the most popular medieval and 30 Years War “flat figures”, or “’flats” (in German: Zinnfiguren), still today are those produced by Hans Müller (1885-1968) from Erfurt which during his lifetime was in the German Empire (Reich) and then the former German Democratic Republic (GDR).  Müller, or Mueller, produced flats from 1927 to 1957.  He specialized in the Thirty Years War (1618-48), “Turkish Wars” (15th-17th Centuries) and the Middle Ages (12th-15th Centuries), as well as doing a tangent to produce some figures addressing Mexican guerrillas in the mid-19th Century.

This section deals almost exclusively with his figures from the Middle Ages.  Müller produced approximately 470 unique medieval figures, which were mostly drawn by top artist Ludwig Madlener (1903-1976) and engraved by Ludwig Frank (1870-1957), who is considered by many to be the finest ever engraver of flats. Especially noteworthy among the medieval figures are those for the Crusades, the 1386 Battle of Crecy and the 1410 Battle of Tannenberg/Grunwald, as well as the 14th Century tournament series.
For many collectors, Müller’s castings are considered to be the most beautiful figures for this period, having employed top-notch artists and engravers.  Unfortunately, when he ceased production, the molds were sold to a number of other producers and it became very daunting to determine from whom the figures could be purchased.  Happily, one can now identify the producers of the vast majority of the medieval figures if you have access to an article in the German national figure club, KLIO magazine Die Zinnfigur, run in four parts in the November/December 2019 to April/May 2020 issues.  Of course that producer listing will become outdated if any of the molds change hands.

Starting in 1954, Müller’s figures were available through the Cultural Union of the GDR (Kulturbund der DDR), which was the Communist government’s approved group that could trade figures within the GDR and also exchange figures for ones from the West, but on a basis far more lucrative for the East.  In Hans Müller’s obituary in a 1968 edition of the Die Zinnfigur magazine, it stated that “for obvious reasons, after the war, he had to struggle with numerous difficulties, so that the focus of his work shifted from figures to the study of castles and he developed a comprehensive database on castles.”

It’s also noteworthy that Hans Müller was not just a producer or ‘editor’ of figures, but he was a very active a collector, painter, diorama builder and subject matter expert.  He started writing articles for German figure magazines in the 1920s, focusing on the Thirty Years War. (Yes, Die Zinnfigur has was published at least 1920, with a brief hiatus during WWII!)  Starting in the early 1930s, Müller began added the Middle Ages to his offerings.  He did detailed research for his figures and was highly regarded for their authenticity and artistic quality.  He was often noted for building dioramas about the Thirty Years War (which was having its tricentennial) and displayed them at major Zinnfiguren events, such as the national exhibitions in 1929, 1930 (in Leipzig), 1931 (in Hamburg) etc..  He also sold his figures in large quantities, with a special price for “50” of the same figure (dioramas were big in the 1930s).

It appears Müller had already ceased producing and selling figures by 1957, or at least had less to do with them.  From that period on until his death on 26 June 1968, his molds were acquired by others, probably starting in 1957.  Some stayed in what was then the GDR, while others were acquired by producers in the West.  They were taken over by H. G. Ellfeldt, (Stuttgart, West Germany), Matthias Frenzel (Meissen, GDR), Heinz Tetzel (Magdeburg, GDR), Heinz Bittner (Halle, GDR), Erwin Ortmann (Weimar, GDR), F.C. Neckel (then in Wendlingen/Neckar, West Germany), Dr. Curt Kollbrunner (Zöllikon, Switzerland), Dr. Horst Neumeister (Merbitz bei Nauendorf, GDR), and above all, Fritz Menz (Burg, GDR).

Because the figures from the molds that remained in the GDR could only be obtained through the official “Kulturbund” exchange system, it made it very challenging to obtain them in the West.  Later, most of the molds for the 12th-13th century, Gothic and Saracen/Turkish medieval figures were acquired by Fritz Menz, then passed to his daughter Irene Menz-Wille (in Iserlohn), who later sold them to Frau Kirsten Howey (Burg bei Magdeburg).  The 14th and 15th century figures made their way in part to Heinz Neumeister (Magdeburg, GDR) and the majority passed through Erwin Ortmann and several other producers to Hans Schwahn (Dessau and Russia) who eventually obtained the molds for the 15th century “Arkeley-Büchse” (culverin artillery) and its crew.  Additionally, Wolfgang Friedrich had some of the figures in his offerings.  The forms for the Thirty Years War were taken over by Richard Wünsch (Halle), and then by Herr Werner Fechner in 2017 (see http://www.fechner-zinnfiguren.de/frames.php).

The Müller figures can be challenging to identify although they almost always feature a diamond-shaped base, and generally include Ludwig Frank’s “LFrk” initials (if he was the engraver) and an identifying figure number.  The initials or marking of the illustrator, generally Ludwig Madlener, are not provided.  The figures for the Middle Ages are grouped and marked on their bases as follows:
Ma-Mw = Special Figures (General) (Sonderfiguren allgemein) (primarily medieval, i.e., 13 of these 19 figures)
MP = Medieval Portrait (Sonderfiguren Mittelalter - Portrait) – 111 figures
MR = Knights (Ritter) (about 300 figures, but some appear with the code “MF”)
MT = Medieval Turks (Türken) (35 figures; Saracens including for the late Middle Ages)
The Thirty Years War appear with “M” and “MB” markings, while a series on Mexico are marked as “MSo” for “Mexico Sonora”.
As one can imagine, the markings on the old castings are often barely recognizable, or even unrecognizable, or are completely missing.

As mentioned above, the Müller-Erfurt figures only bear the initials or marking of the engraver, e.g., for Ludwig Frank, Joachim Emmerling, or Franz Karl Mohr (1896-1970).  However, the initials of the artists who drew the figures essentially do not appear, most noteworthy, the absence of those of Ludwig Madlener who designed the vast majority of the figures.  For the early figures, produced from 1927 to 1938-39, Ludwig Frank also personally prepared some of the drawings.  The drawing of Sultan Saladin was based on the plate by Doré, the illustrations for the individual Ottoman Turks were derived from Richard Knötel’s uniform plates in the Uniformenkunde series, while some of the figures of medieval Russians were copied from or based on the plates by the Russian artist A.V. Viskovatov, published around 1899.[1]

For those who have Michael Taylor’s book “The Art of the Flat in Figure,” you can find photos of some of Hans Müller’s figures, including some painted by the renowned flats painter Walter Fischer.  But note that he attributes them to Irene Menz-Wille, who took over the molds.[2]  Erwin Ortmann’s “The Collector’s Guide to Model Tin Figures” also features his figures, but he cites the artist Ludwig Madlener and engraver Ludwig Frank rather than the producer, Hans Müller.[3]

The Müller figures are currently available from the following producers, but one must consult their catalogues – if they have one – to determine which figures they sell.  It should be mentioned that many of the figures are available from the Berliner Zinnfiguren company in Berlin, but only as sets.  Most of the vendors’ web sites - if they have one - are viewable in English.
Zinnfiguren “Fritz Menz” Burg (Fr. Kirsten Howey)  - www.zinnfigurenfreunde-burg.de/images/offizin/menzkat.htm - these are primarily figures from the 12th and 13th centuries (early crusades)

Berliner Zinnfiguren (for sale of Müller’s figures in sets only) - www.zinnfigur.com

For those interested in more information about the Müller (Erfurt) medieval figures, there is a publication in the works which should be available in August 2021.  It should include a listing and photos of all the figures with information on the timeframe, country/group represented, engraver, vendor and remarks.  It will also feature color photos of Müller figures painted by eight or more collectors including a number who are master painters.  The work will be a softcover edition and is planned to go on sale at the 2021 Kulmbach figure festival.  It will be in German, but it may also include an English synopsis.

The pictures on this page are primarily from the author’s collection, including figures by former NCMSS (then NCMC) member Tom Yuskiw (1941-1989) who did his figures using printer’s inks (!) rather than oils or acrylics. Also included are some figures painted and generously provided by Herb Kuehlwein, formerly of Newport News and now of Tucson, AZ.

This article was based on the earlier work of and information provided by Frau/Mrs.  Kirsten Howey and Herren/Misters Rüdiger Engel, Henry Schmidt, Hans Schwahn, and Hardy Howey, to whom I owe thanks.  I am grateful to them as well as to Alexander Baden, Christian Otto and especially to Karl-Werner Rieger and Manfred Levec for their assistance. 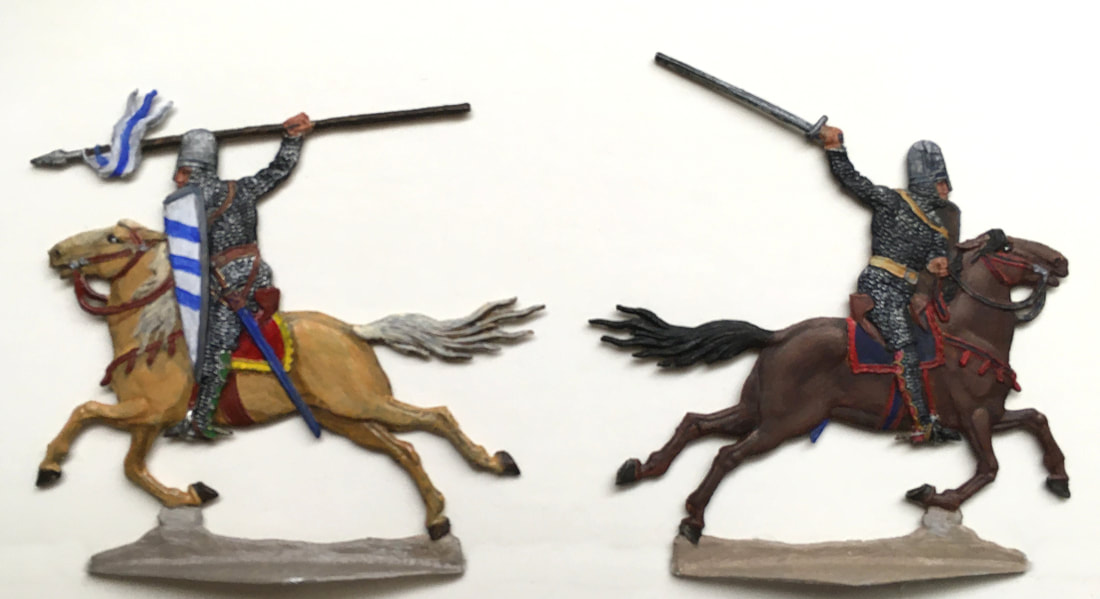 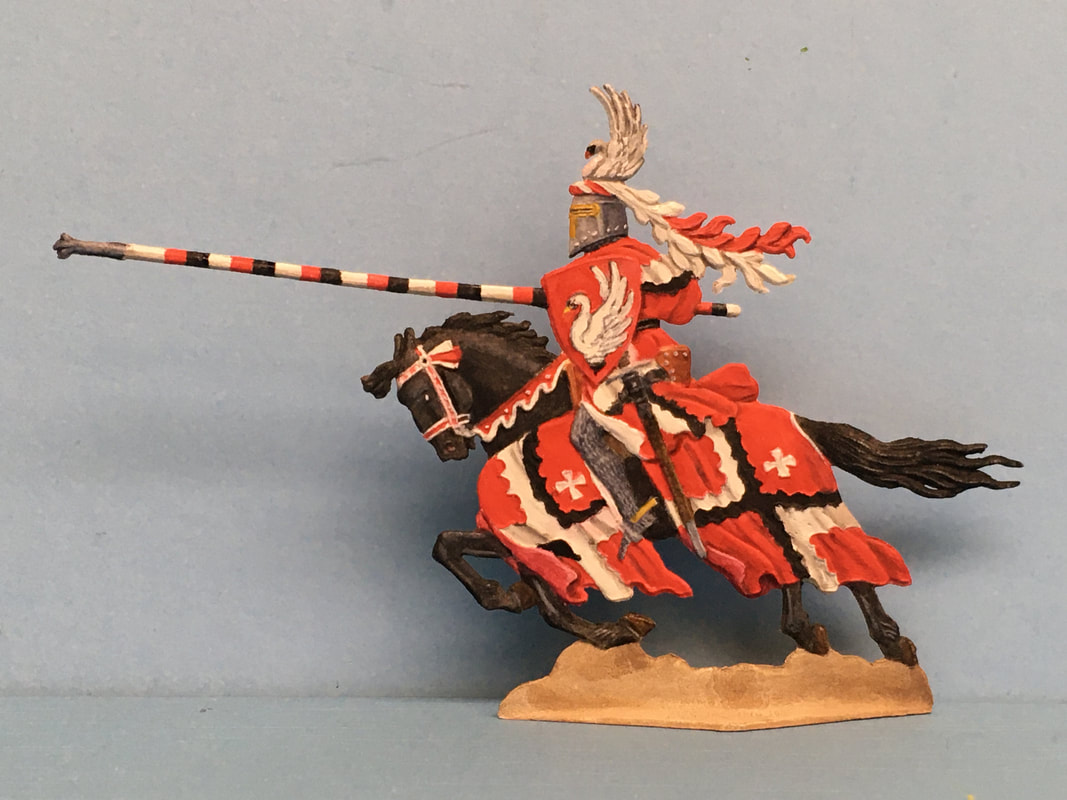 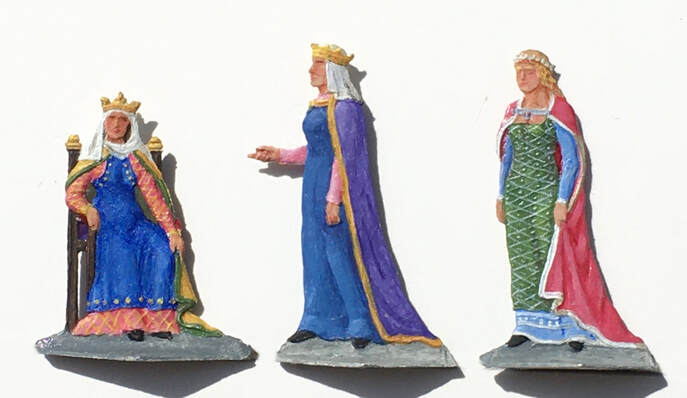 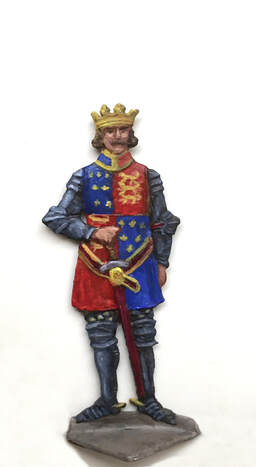 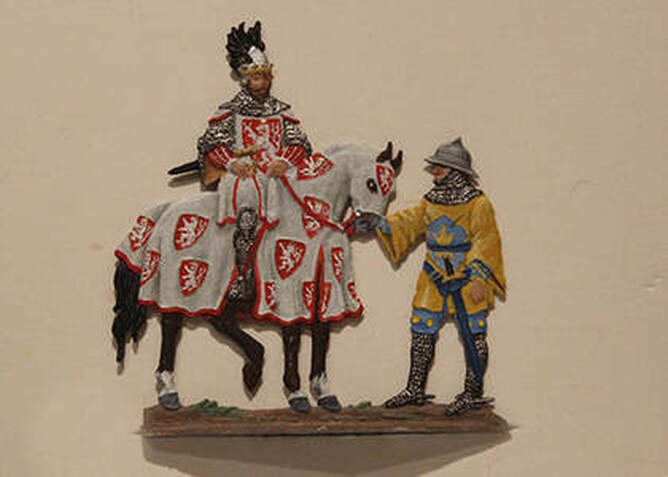 The Battle of Tannenberg/Grunwald - Die Schlacht bei Tannenberg - 1410
The Teutonic Order vs. the combined Polish-Lithuanian and Russian armies 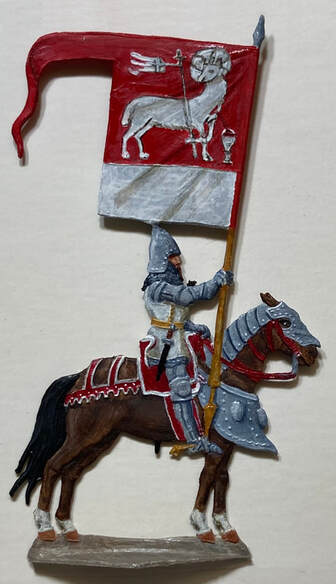 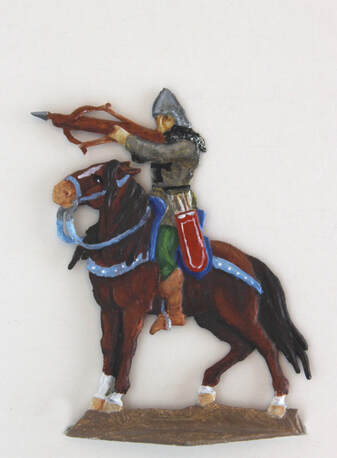 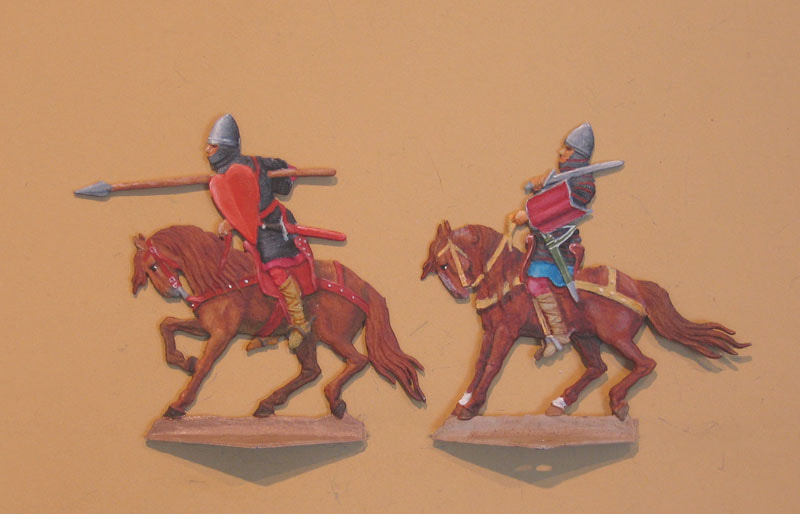 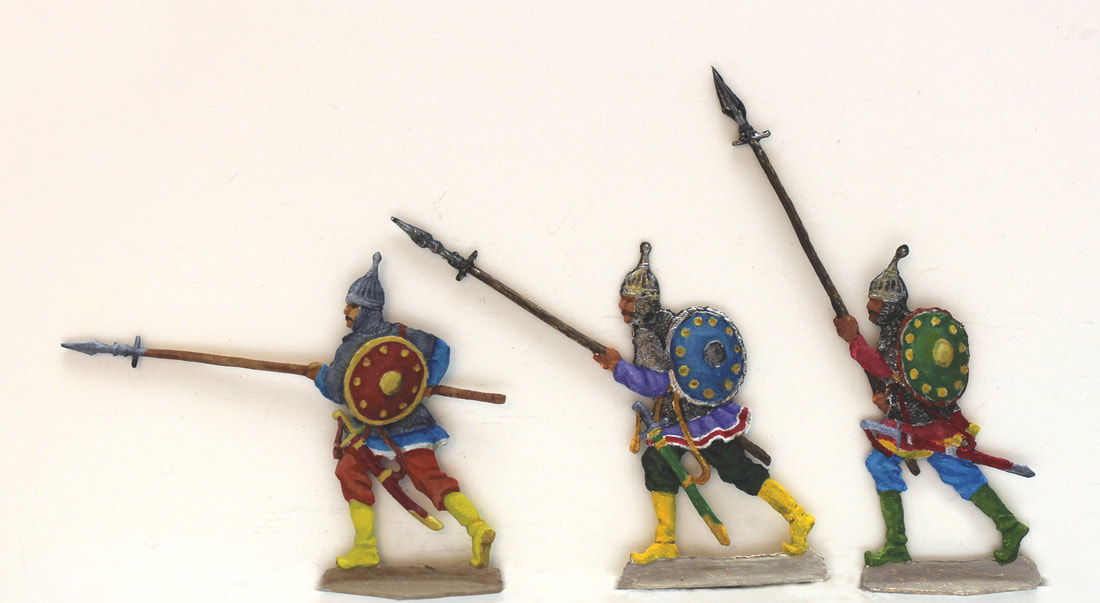 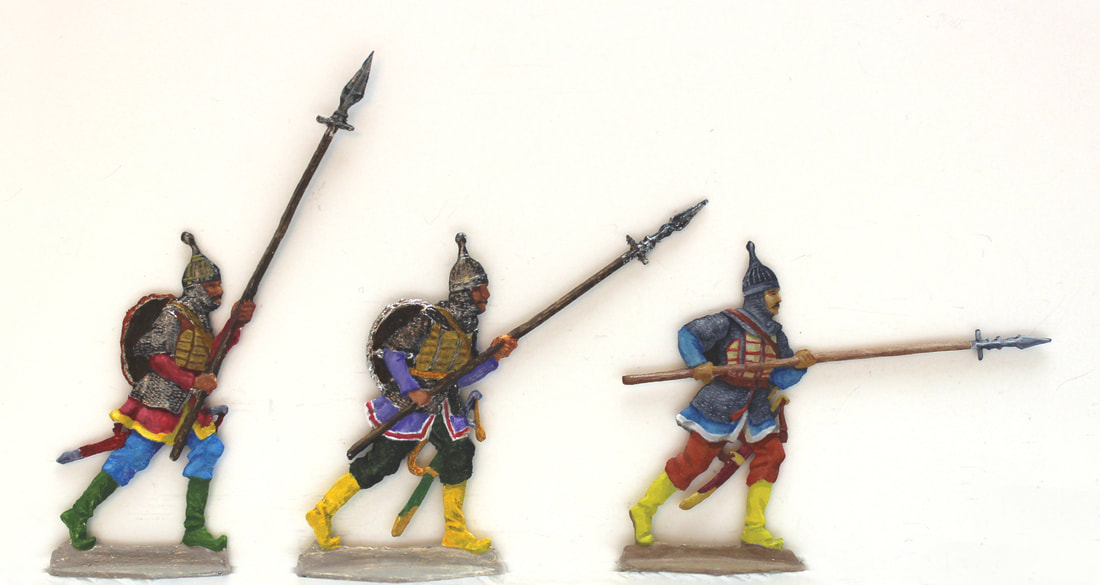 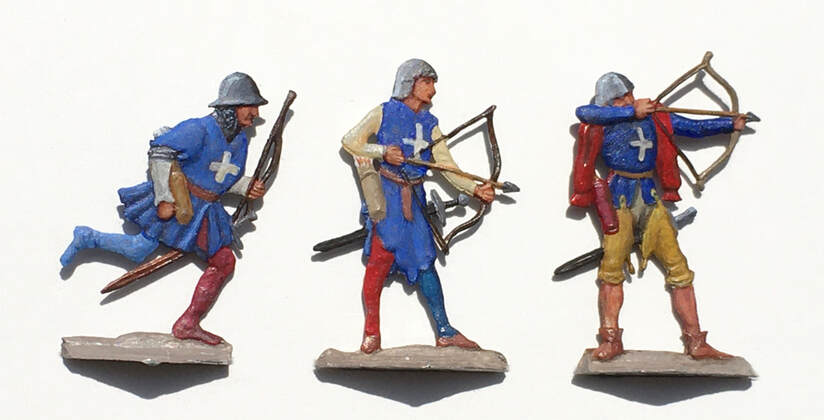 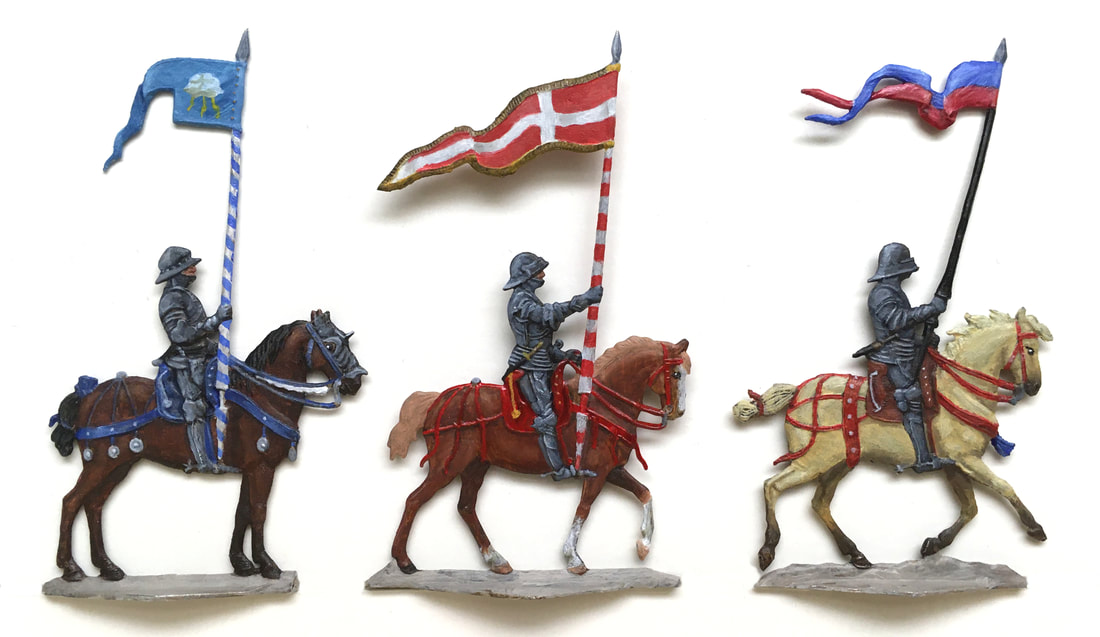 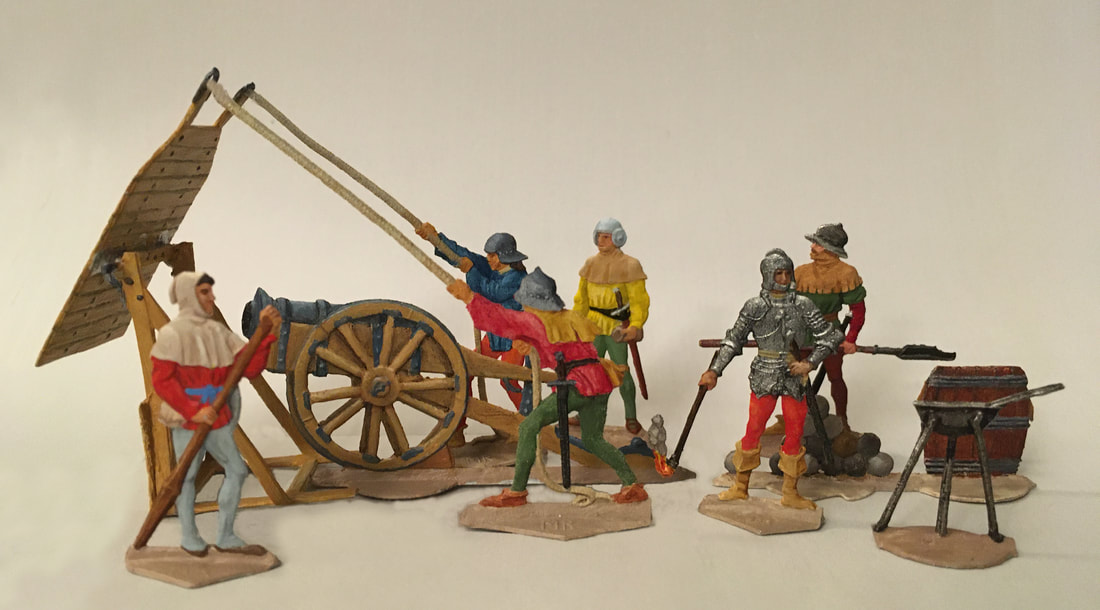 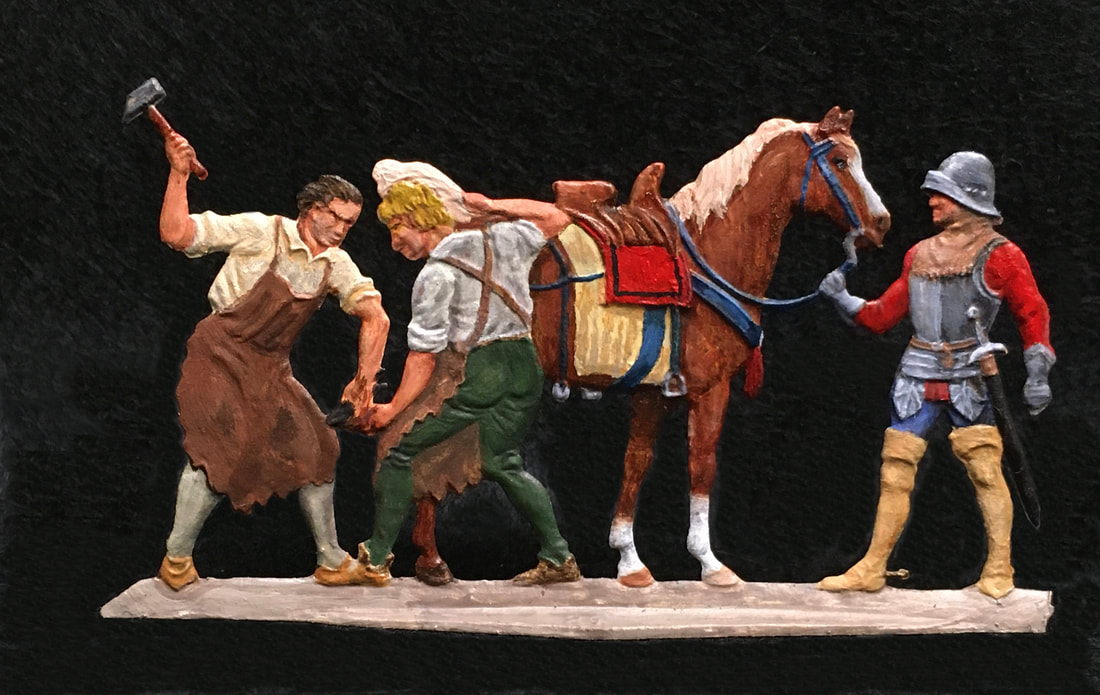 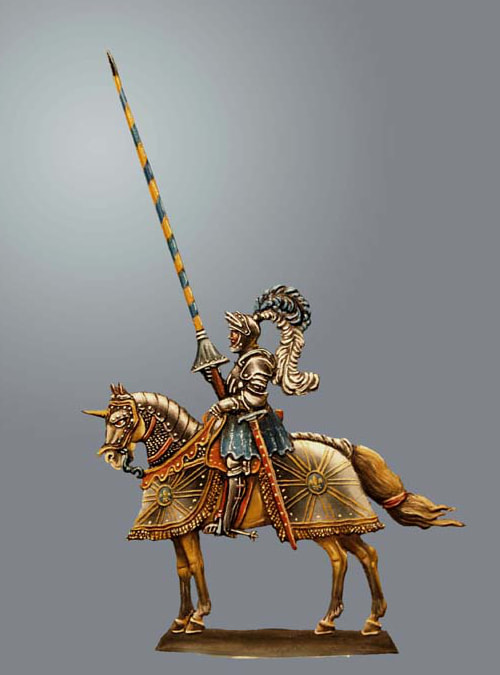